stretching myself: the freaky twin needle

Didn't I just say I wouldn't be sewing much for a while? I'd be too busy decluttering and simplifying all about the place? Ah, but it's all about striking a balance. Happy Mama, happy family. Yeah?
Er, whatevs.
(I did just unload another massive bootload of stuff at the Salvos yesterday.)
Now.
I've had Wendy Mullin's Sew U Home Stretch book for a while.
The first thing I sewed from it, I had so little idea, I got the stretch the wrong way. However, it did confirm to me that the Size M was (or would be) a good fit. Which is lucky, since I had so little idea I merrily chopped those Size M pieces right out of the tissue paper.
I have some lovely classic navy and white striped jersey, and I thought it would be good in the boat neck style (above centre). I tried it in some plain organic cotton jersey (that I was less in love with) first.

The basis of this book is three patterns: a regular t-shirt, a raglan-sleeve version, and a basic dress. Then it shows you how to vary each of these patterns for a lot of different looks.
The end of these instructions suggest you could add buttons on one side of the neck. But if that part of the pattern is only 1 inch wide (including seam allowances), this leaves a maximum of half an inch for the suggested three buttons??
Once I'd made this top up, I curved the sides in a bit for some shape. This pattern has you add two inches at the bottom for this style. I did that, then in the end had to take 4 inches off, due to my own body pattern having clearly been missing the 'waist' piece when I was sewn together.
The book has instructions for 3/4 sleeves but I wanted full length. I altered by lengthening and then narrowing them down toward the wrist.
This is the first time I've tried the twin needle thing for hems and... it seems to defy logic but it works! I mean, I understand how the bobbin thread ends up in a zigzag so naturally would have some stretch. But doesn't the top just end up as two straight stitches? Why would they have any more give than two ordinary straight stitches? But they seem to. Can anyone explain this to me? 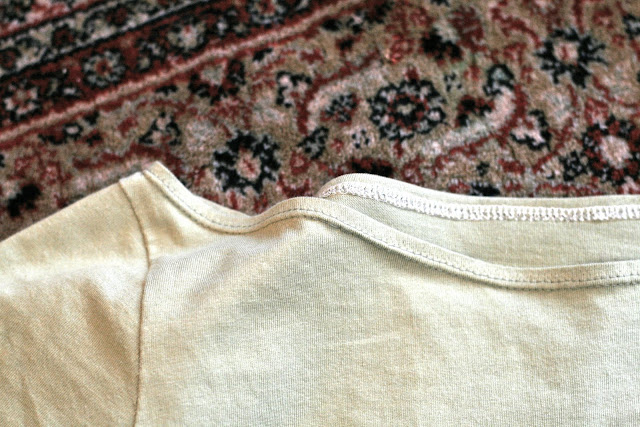 The book says to serge the neckline then fold under and topstitch. I originally did that with a zigzag and it came out a bit wobbly and stretched. So, putting my patient hat on, I unpicked and then stabilised it with fusible tape. Then twin needled it. So much better.
Here's the machine I used for the twin needle stitching, since they're not available for my Singer 319K.
I bought this on a whim from a disposals store, telling myself I really needed a free-arm machine. Jasper calls it 'his' machine now and to his credit he can use it fairly well. I won't disclose how much I've spent on repairs for this little dear, hmmn. But I will show you its cute red case:
and the original manual found inside:
and the dear little double layered accessories box: 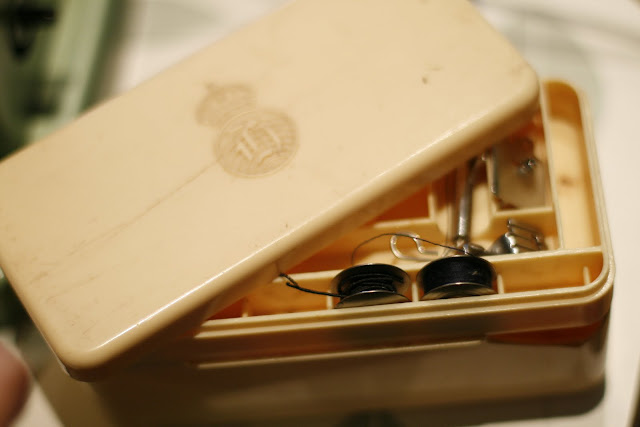 and the back of it with the twin threads in action: 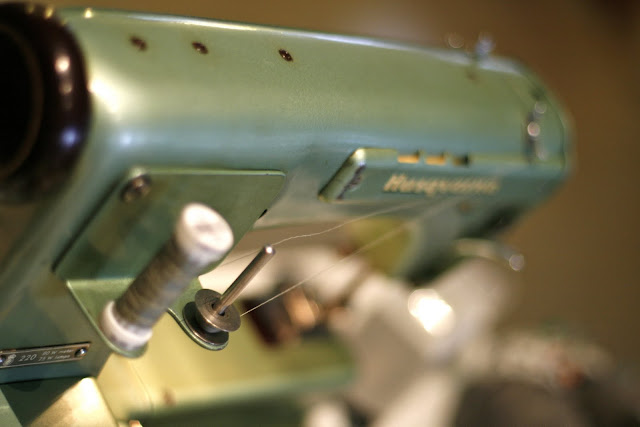