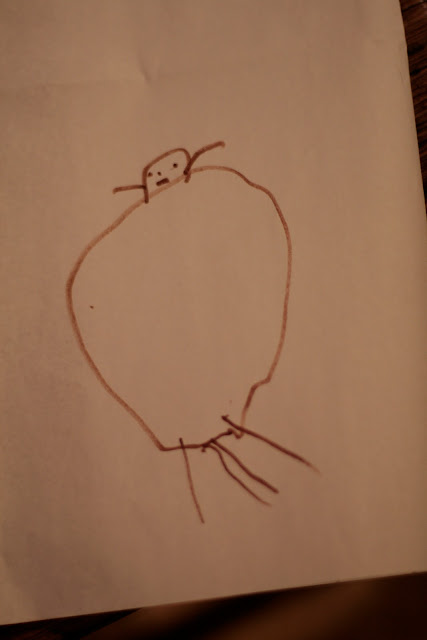 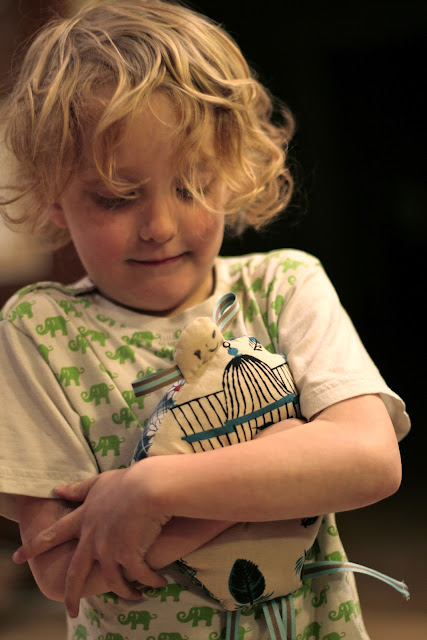 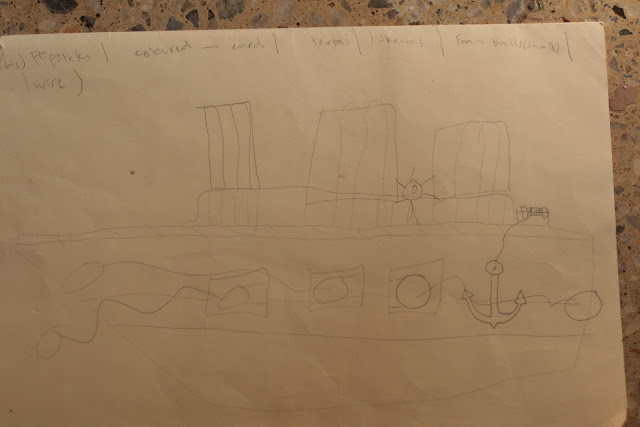 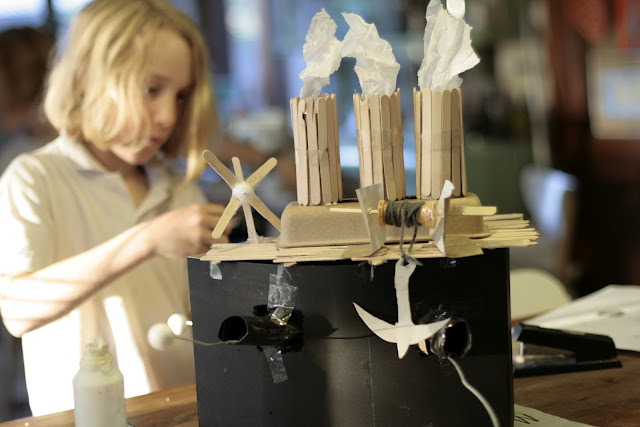 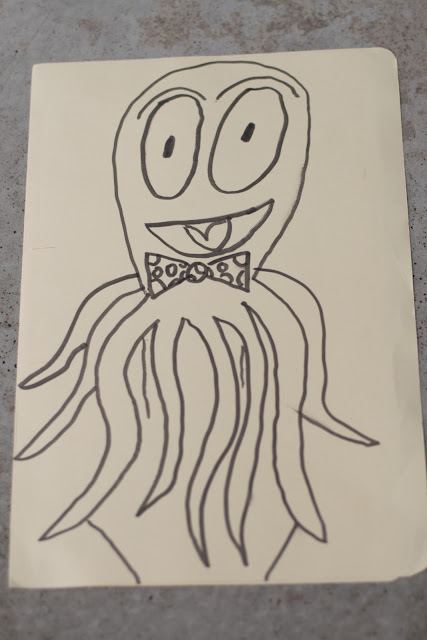 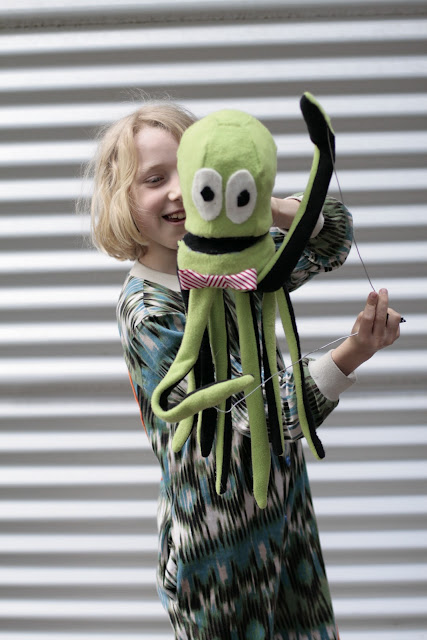 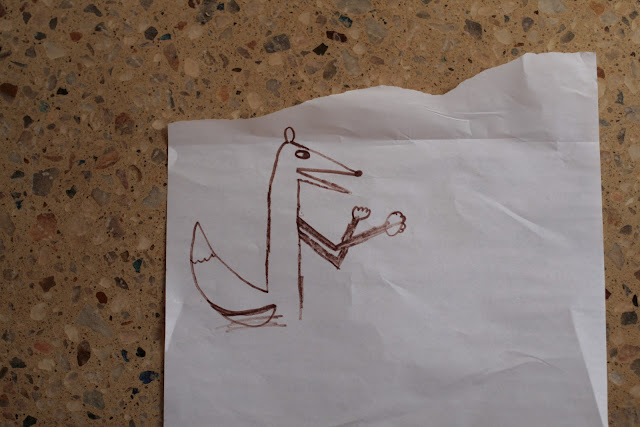 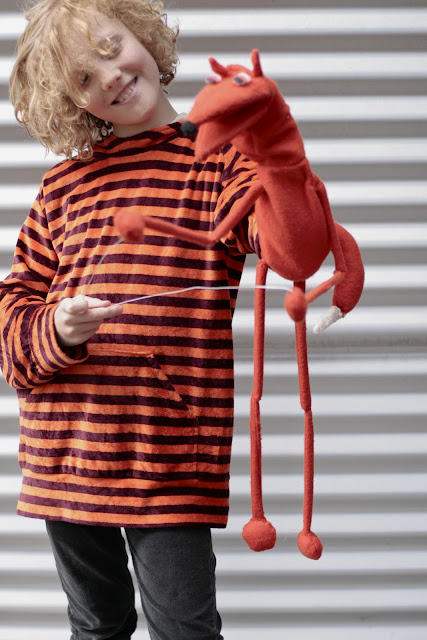 There's been a lot of making going on so far these school holidays!

We watched a fabulous documentary called 'Being Elmo', about Kevin Clash who is Elmo's, you know, very close friend. He was devoted to puppetry from a young age and eventually went to work with his hero Jim Henson.

Charlie and Jasper were inspired to make their own puppets. Charlie's fox was 99.9% made by himself. I helped him unpick something at one point and he said to me "don't do too much!" so I made sure to step back and let him go!

While Jasper needed a bit more help, I prodded him to just give it a try and he gained more confidence. As I write, one octopus leg has just fallen off, so he's learning more about patience and hand sewing technique right now, heheh.

It's exciting watching them now at an age when they have accomplished basic skills and can now use them to make their visions come to life.

Hmm, what with all this facilitation of boy-creativity, there hasn't been a lot of room for my own. I did make some shorts for Jasper though. To my scaled-up Oliver + S Sketchbook Shorts pattern, in hemp & organic cotton left over from my Poppy Tunic, with a bit of topstitching interest. 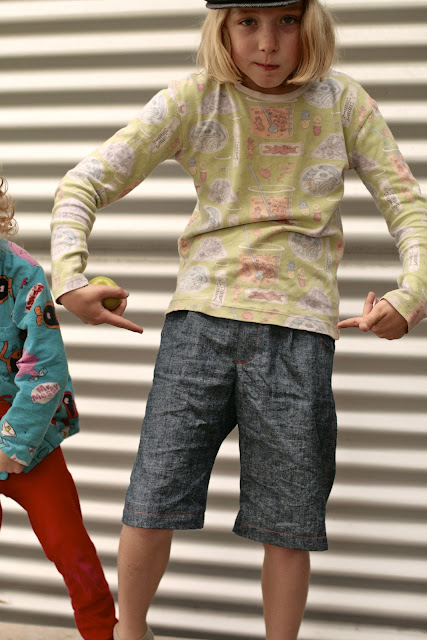 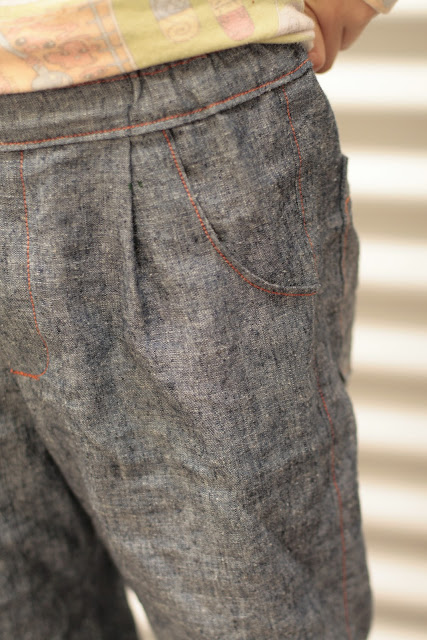 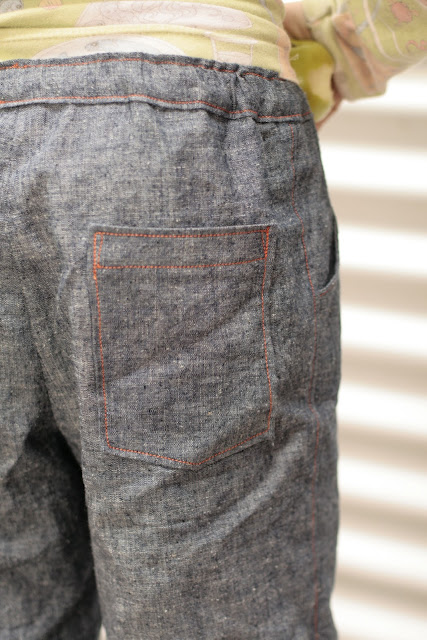 Oh yes and here's another little puppet Jasper made before the more ambitious ones began. It's a dragon called Alistair: 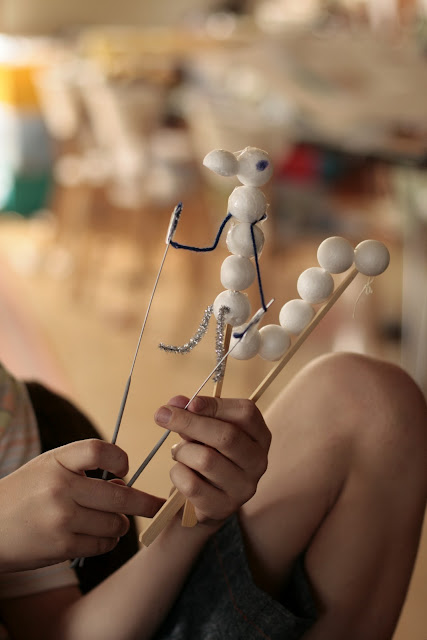 Those little sticks to work his arms are sparklers! I'm not too sure about the toxicity of handling those a lot. Hmm.

One week of school holidays down, one to go. Then I will have three boys at school! 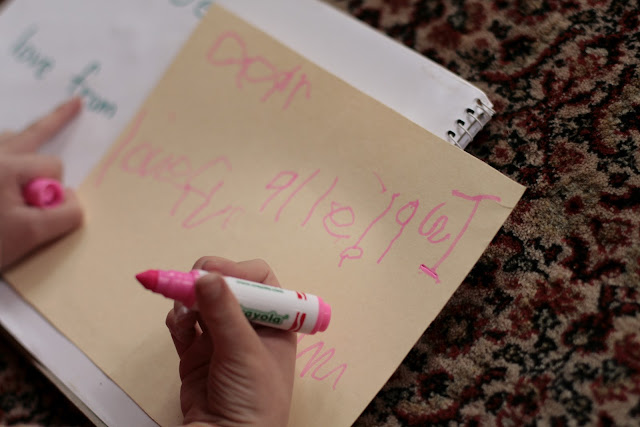 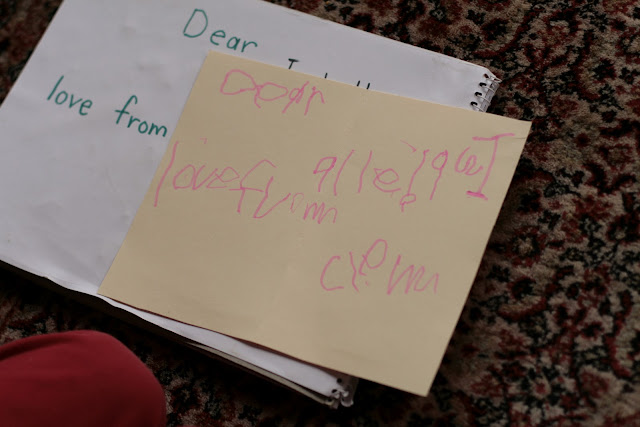 I do find myself a bit wistful about our smallest growing up. This is his last ever week of Kindy. However, look at all the awesome that's happening and is yet to come. He's so ready to stretch his wings.

I love the undaunted backwards writing. And the way he starts his 'e's from the bottom. And the 'm's that could keep going and going. And this confident writing has all happened very recently. They seem to take big leaps and bounds just when they are ready.

Right. Getting sad now and school is still three weeks away. Hmm. Must go clean something.

Do you have fabric that you feel is 'too precious to cut into'? Ridiculous, isn't it. It's not doing much good folded on a shelf. The Marimekko fabric that Andy brought back for me from Denmark a year or so ago just had to be used. I'm so very glad I plucked up the courage. 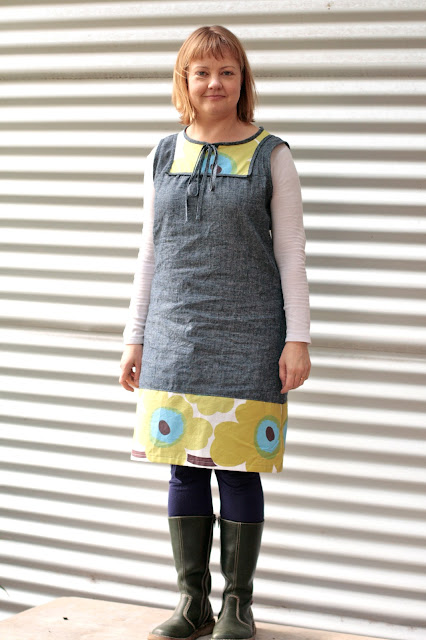 Sorry it's a bit wrinkled. We've been up on the roof cleaning out gutters all morning (in old clothes) and I snatched a brief opportunity between getting cleaned up and Andy having to pick Clem up from a party to get some photos. One of the gutters was so full of well-composted leaves, I found an earthworm in there. (!?) 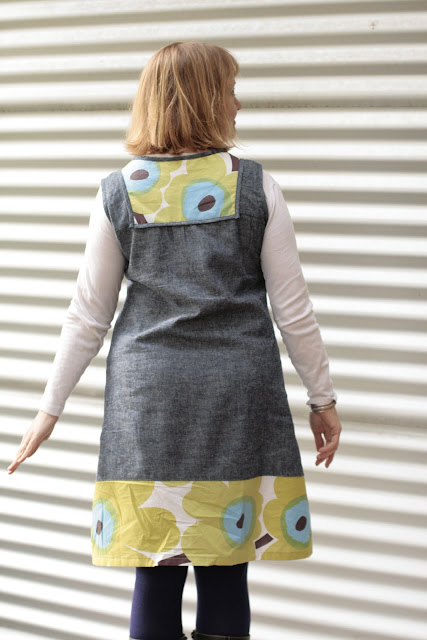 I love this Make it Perfect Poppy Tunic pattern, and I made this one knee-length so it's suitable as a summer dress as well as for winter-over-leggings. I made the same alterations as I did last time (a little shaping on the side seams and taking in at the front shoulder pieces) and cut the bottom panel in a continuation of the slight A-line shape.
The main fabric is a hemp/organic cotton denim from Duckcloth. Actually I don't know I'd really call it denim since it's really rather lightweight but quite beautiful and lovely to work with.
I haven't put pockets on this one yet. I'm a bit reluctant to spoil the simple look, but... I really love pockets. And I don't know that side seam pockets would do my shape any favours in this. Any suggestions?

Inspired by Soule Mama: {this moment} - A Friday ritual. A single photo - no words - capturing a moment from the week. A simple, special, extraordinary moment. A moment I want to pause, savor and remember. 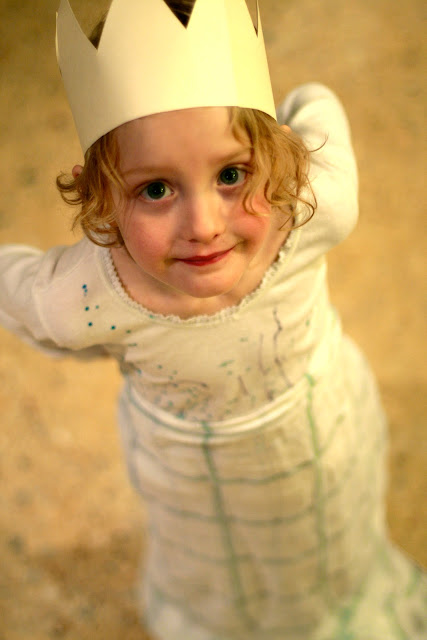 Lords of the Rings and lady of the capes

Better late than never - some pictures of my boys dressed up for Book Week assembly last Friday.
Charlie decided to be Gandalf the White from Lord of the Rings. He very carefully sliced the three-sided end of that staff out of thick cardboard with a craft knife. He also made himself a wooden sword that even has a rune carved into the handle. 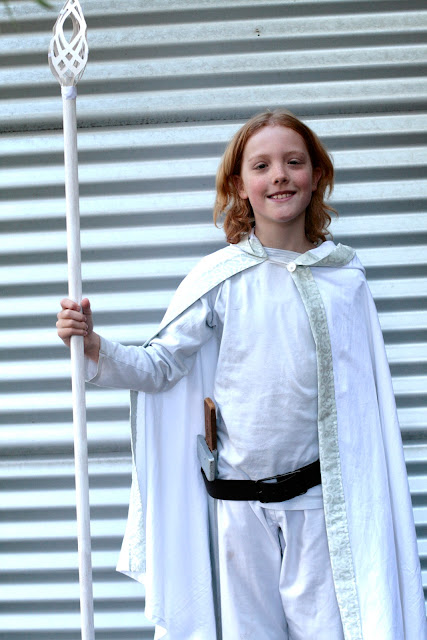 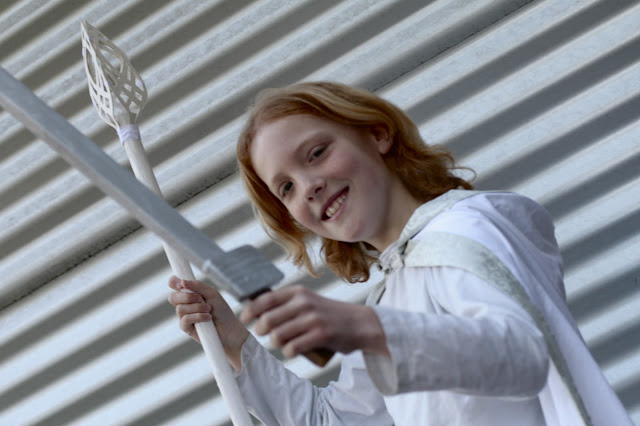 The cape is made from an old white sheet (plus a little fancy trim), adapting the good ol' Reversible Hooded Play Cape pattern from Growing Up Sew Liberated. Op-shopped belt, white t-shirt and taekwondo pants finished the ensemble. I tried to straighten his hair with the hair dryer but those curls just kept springing back!

Jasper decided to go with the theme and chose Legolas. An op-shopped tablecloth became his cape, he fashioned himself a bow and arrows and instructed me on how to sew a quiver from some denim scraps and webbing. 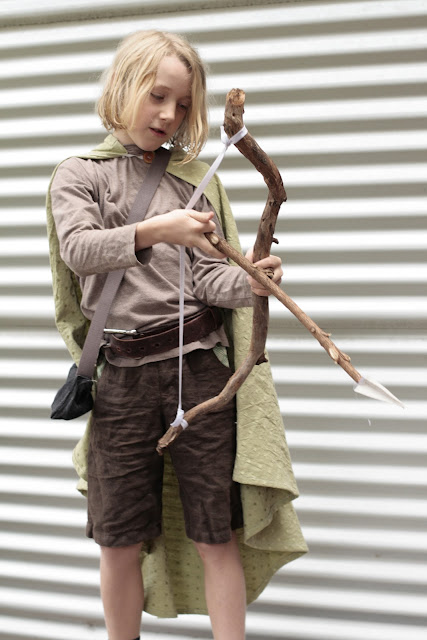 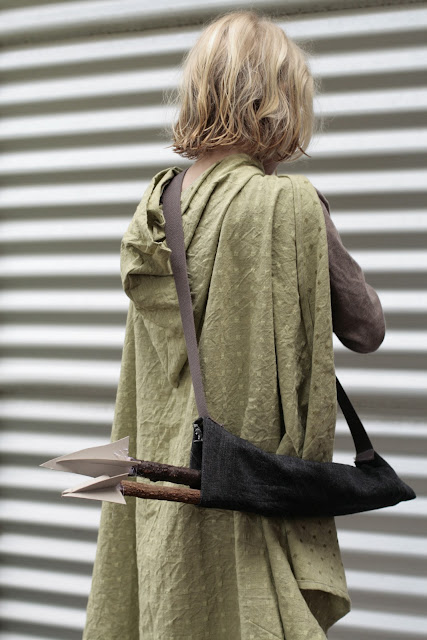 (Jasper is a master with the hot glue gun.)

I love that the Book Week tradition is still encouraging our kids to enjoy dressing up, right through primary school. There's "so much scope for imagination" as Anne Shirley would say, within the broad theme of book characters. (I just finished reading Anne of Green Gables to Charlie and Jasper and although one book-loving male friend suggested it was tantamount to abuse to read that to my boys, they tolerated it remarkably well... Charlie remarked at the end "that was actually quite good".)

The boys still really enjoy me reading aloud to them so I'm going to keep that going as long as possible. We have moved on now to Wonder which I read about at Flossie Teacakes (sorry I can't find the specific post) and although we haven't finished yet I can already highly recommend it for its exploration of tween-age friendships and emotions. The boys are loving it ("one more chapter, pleeease?") and it's quite funny, too.

Today the kids have a 'pupil free day' (i.e. no school) and I'm taking the lazy option of letting them play as much Wii and computer games as they like so long as they do a few small jobs for me and don't fight. May the parenting police forgive me. I'm hoping to get some sewing done!