love is... sacrificing my Viewmaster fabric

Hands up if you remember this nauseating naked couple in the 'love is' cartoon panels. 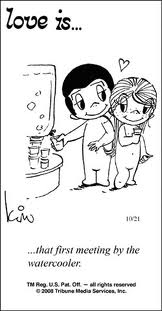 Yick.
(What were they doing naked by the watercooler? If they're naked, then where are their 'bits'? How can something so un-human-looking actually be recognisable as a human? I actually found a fan site for this comic where someone had drawn clothes on them, which looks even stranger.)
My childhood self was particularly struck by a fridge magnet (where? certainly not my house) that said "love is... letting him grow a beard". It was a glimpse into a world where adults were not mere founts-of-all-knowledge-discipline-food-and-shelter, and called Mum and Dad, but they actually had multi-dimensional relationships with each other. Weird.
This is love: 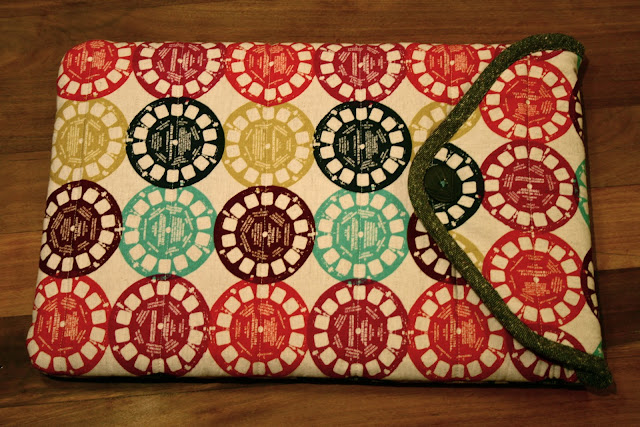 Yes. Real love is taking your precious half-metre of Melody Miller Ruby Star Rising Viewmaster fabric and making it into a padded laptop sleeve, at the request of your husband, who is going to New York and leaving you alone with three children for ten days over Easter and school holidays.
This is also love:

My precious real Viewmaster from childhood. My bigger boys have had supervised access to it, and fortunately Clem is yet to discover it.
A bit of detail about the laptop sleeve. I started with an online tutorial, but messed up pretty quickly and had to wing it from there. 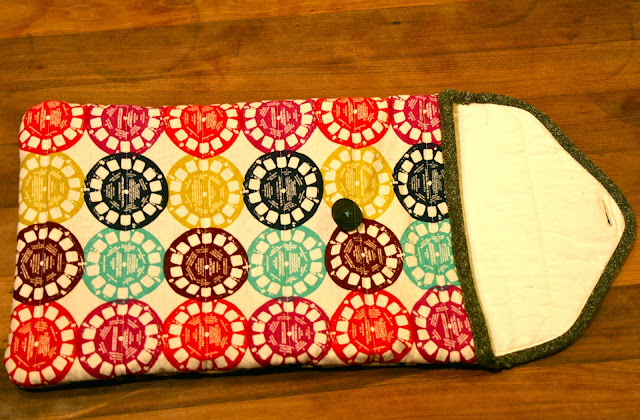 I used two layers of cotton quilt batting, and flannelette for the lining. But I got ahead of myself and quilted that all together in panels for front, back and flap before realising I then could not do a turn-inside-out neat lined finish. So the interior has pinked seams (looks fine actually) and I finished the opening with some homemade bias trim.
In other sewing... my La La Log Cabin quilt top is finished. I suspect that was the fun part over with.
I have purchased batting. I have enough of the lovely moons fabric (pictured underneath the Viewmaster) for the backing, although it's not wide enough so I will need to rearrange a bit. My plan is to machine quilt in the ditch between the squares, then bind the sucker, then hand-quilt within the squares, with care, persistence and patience, hahah. And then, I may never quilt again. We'll see.
Any tips for a non-quilter making a quilt?
Any closet 'love is' cartoon fans out there?
Have you ever sacrificed some really, really awesome fabric for someone else, and did they appreciate it?
- Jane x
Posted by Jane at 8:28 PM 2 comments: 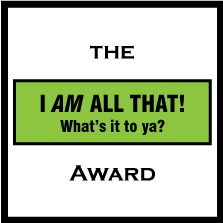 Why, thanks KC of The Sewcratic Method! My first blogging award, and I guess a good way to disclose some useless information about myself, and pass on the love. Kind of a blogging chain letter.
We did an extension on our house a few years back and our builders were called "All That And More," only in typical builder style, they were rather not, and we ended up calling them "Some of That And Less". Nevertheless, us bloggers, we are indeed all that, and we don't bugger up the actual cement slab that's holding everything up in the first place now, do we?
1. what size shoe do you wear? if you wear a size 7, can i borrow your shoes?
Is it dreadful that I live in Australia but only really know my European shoe size, which is a 38 - 39? It's not that I have extravagant taste in shoes... if I had to describe my general footwear style it would be 'flat and clompy'. The last shoes I bought were these below except in a dark red. See what I mean? 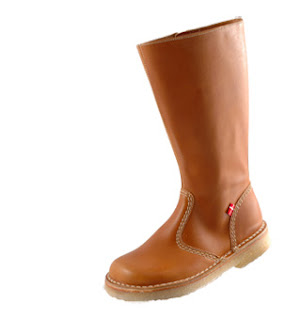 2. 30's or 60's?
60s. It was just before I was born, which always seems to make a decade seem exotic and cool, doesn't it?
3. have you ever kissed someone you shouldn't have?
You know, I don't think I actually have, well, I mean, a few unwise choices for sure but nothing really illicit. Dull, huh.
4. have you ever been poisoned? was it by the girlfriend of the person you kissed? that is awesomely "knot's landing."
Only moderate alcohol poisoning, and entirely self-inflicted.
5. who's on your "celebrity free pass" list (top 5)?
I actually had to Google this to see what it meant, and apparently it's someone you'd have an evening of lerrrve with, if you had a 'free pass' not to get in trouble with your partner.
This is tough. I don't have nearly as many celebrity crushes as I used to. Hmmn. In no particular order:
David Tennant
Justin Timberlake (I know, sad)
Jonas Armstrong as Robin Hood in the BBC series, except not after he felt the need to bulk up
Harrison Ford about 20 years ago
Adam Hills (Aussie comedian/TV host)
Okay so now I am meant to pass this award on to five people... except being a reasonably new blogger, I don't know for sure that five people will even read this... or that I 'know' 5 other bloggers yet!
If you're reading (is that how this works?), I would love to pass this on to:
Carolyn from Fake it While You Make It
Chika from Blah Blah Blah
Suellen of Sew Indigo
Inder-ific of Inder Loves Folk Art
I know that's only 4. My other 'follower' is KC who nominated me! My dear followers. You ARE all that!
- Jane x
Posted by Jane at 8:33 PM 2 comments:

there's an earwhack in my sink

Did you ever read this? 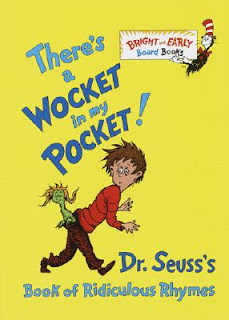 It was one of my favourites and I was reminded of it today. Clem, he who brought us the alphabet as "H I J K lempo bee", believes a cotton bud (Q-tip?) is called an "earwhack". Two would be "earwhacks" (earwax).
Don't you love those little things they hear and interpret in their own way? Until quite recently our almost-ten-year-old thought fingers were "thingers".
Anyway, while I was looking the other way, Clem popped an "earwhack" down the bathroom sink. Not particularly looking forward to the plumbing repercussions of that. Oh well, at least there's not a Noothgrush on my toothbrush.
In sewing news, the big boys decided they needed pyjamas in the style of Clem's mushrooms-and-stripes tops. I gleefully seized the opportunity to purchase a bunch more fabric.
Then I spilt coffee over it all.
Then I washed that out.
Then I made these.
Really should do something about that grass some day.

Do not drink coffee near freshly washed and folded fabric stash.

That was Clem's excited shriek when he saw me making this top. 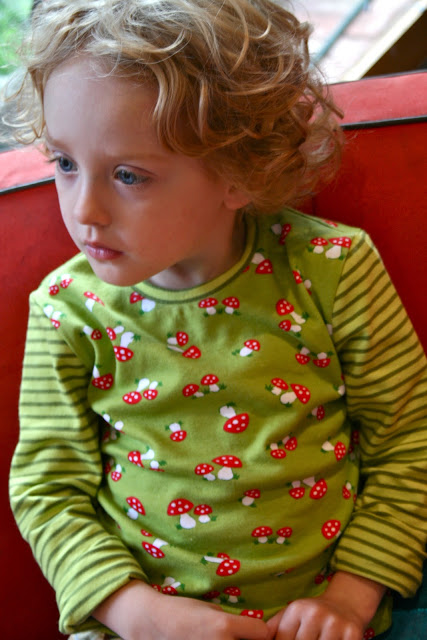 I'm a bit of a 'fraidy-cat about sewing with knits. And it's not often I see knit fabrics that inspire me. However I've been eyeing off these Hilco Campan (striped) knits for a while, and then I saw the Hilco mushrooms. Gotta try. Especially while I still have a boy small enough to get away with such cuteness.
I bought 50cm of each of each of these from here, and this pattern. 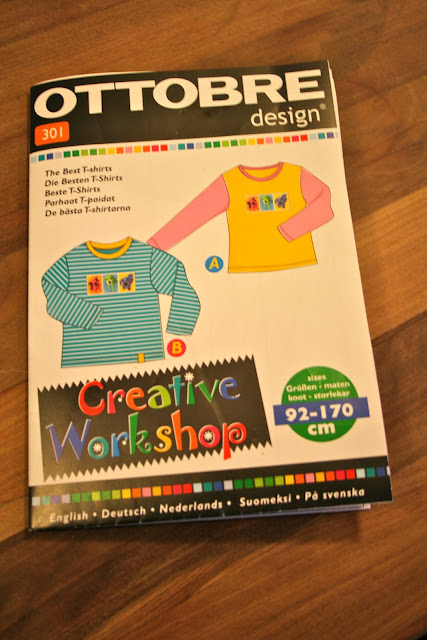 The fabric was enough to make two tops (reversing the body/sleeve fabric combo) and there's even a bit left over. I used the 104cm size which I'd call a 3-4, and the pattern goes up to sizes big enough to fit all my boys. Heck, maybe even me... I'm only 163cm!
My old machine doesn't have a specific 'stretch' stitch so I went with a 3-step zigzag for the hems (overlocker/serger for all the seams). The zigzag isn't the most professional look but I think it's okay on a busy top like this.
I went with the more fitted version of the pattern because that shape seems to suit my boys more. I wondered if it might look a bit 'girly', when it's on it just looks nice and snuggly. 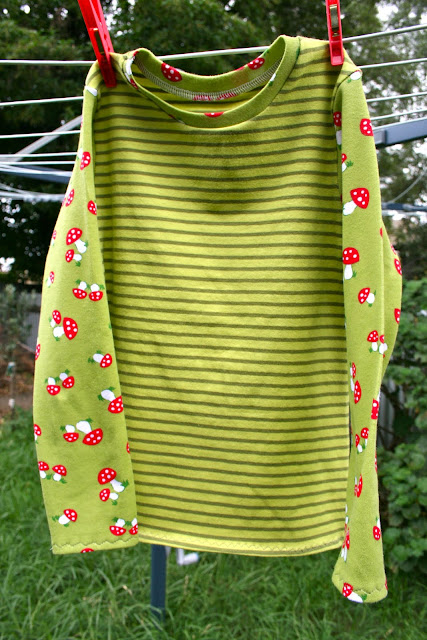 In fact I can't stop hugging this little man while he's wearing these. With his big eyes and curls, yeah, I'm a total sucker. I'd let him get away with almost anything. Except pulling the whole roll of toilet paper out on the floor. Classic 3y.o., hey.

I don't see myself as a quilter really, but what to do with all the beautiful fabric scraps I'm accumulating?
Okay, just one little quilt. See how it goes. Is this the thin end of the quilting wedge?
In a fabric order from here, I received a 'free un-pattern' for their 'La La Log Cabin' quilt. I'm not following it exactly, but using the basic idea. And it's kind of addictive.
Cutting mat, to machine, to ironing board, back to cutting mat.
Play about, see what fits, what looks right. Very little planning. Slicing away at all angles. A vague colour scheme. And using up some of my favourite weeny pieces. I'm loving the process.

Six blocks so far, I'm thinking maybe 25, which they say will make a throw-size. Might put sashing in between for better definition between the blocks?
It remains to be seen whether I am still so enthusiastic when it comes to the actual quilting part. Besides, how would you quilt such random shapes? Maybe this will be an all-winter-long hand quilting by the fire project. Does that make me sound old, or just crazy-crafty, or both?